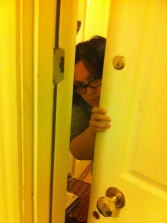 These days I’m a pretty poor evangelist! I wasn’t always like this. I used to be brave, bold, fearless. I also used to be obnoxious, arrogant, bordering on downright rude! Shame I didn’t land somewhere in the middle really.

One of my funnier brushes with the coal face of evangelism happened in conjunction with my Dad. He can always be relied upon to move any story into the hilarious/embarrassing category. However it wasn’t him I was trying to win over. I came home from work one day and he informed me that 2 religious men (not priests now…!) had been at the door. They were dressed in suits and ties and had haversacks and clipboards with them. When they asked my Dad if he was interested in religion his reply was something along the lines of… “Oh now my daughter Annmarie is in to all that, she’s not here at the moment but call back next week and she’ll talk to you about it. Sure she’d talk to you for hours about it. Call back when she’s here” and he promptly shut the door.

He was delighted he had dispensed of them with so little time and effort, my mam was DISGUSTED that he had invited them back but I was thrilled at the prospect of leading these two poor misguided souls into the light.

It was a few weeks later and I’d almost given up hope that they would come back. Then I saw them out the kitchen window. Two men in suits, clipboards in hand. This was it!!! I ran to the door, swung it open and before they drew breath I said – something along the lines of,

“Now before you start I want you to know that I am a born again, Bible believing Christian. I believe Jesus is the son of God. He is the Saviour of the world, died for our sins, raised from the dead to give us life and if you’re here to offer me a half baked version of this Gospel then don’t bother. And before you start arguing points of doctrine let me tell you that nothing…NOTHING… changes what God has done in my heart and in my life and maybe it is YOU that needs to sort out what you believe about God.”

I stood there, Charlton Heston-like, I could almost feel the staff in my hand and the wind in my hair and I’m sure I heard the distant strains of… “Let my people go!!!!”
After a moment’s silence I looked at the two men for the first time. they were both pale, with their mouths open. One still had his finger in the air where he had not quite managed to ring the bell. The other had a business card in his hand and slowly handed it me saying.. “eh we’re from Alcorn Insurance and… well… we were really just wondering if you’d… well if you might be interested… eh… well a chat about.. well… life insurance? But I suppose you…  you probably don’t think you… need it.”

The following few minutes are a bit of a blur really. But they hurried back down the path and I shut the door  and stared at my shoes for a bit. Sad day when the best your new found faith can do is drive evangelists (and insurance salesmen) away from your door.

I’d love to think that those guys are now leading mission teams to the Peruvian villages and Indian deserts. But I’m afraid I can’t confirm that, it is possible I suppose.

But one thing I’m fairly certain of, they aren’t selling insurance anymore!!!

8 thoughts on “You never know what’s going on behind closed doors…!”