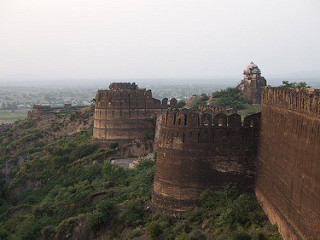 This is a word that is easy to pass by in the Bible. It’s only mentioned a few times. Rampart.
Definition of Rampart on dictionary.com says this:
1. Fortification.
a broad elevation or mound of earth raised as a fortification around a place and usually capped with a stone or earth parapet. 2. anything serving as a bulwark or defense.

One of the few uses of this word in the NIV is found in the Book of Habakkuk. Habakkuk, one of the ‘minor’ prophets, has complained to God and received God’s response. God’s answer to Habakkuk’s first complaint is not a pleasant one. He declares the people of Israel will be defeated in battle and taken into captivity by the Babylonians, ‘that ruthless and impetuous people, who sweep across the whole earth to seize dwellings not their own.’ Habakkuk goes on to make a second complaint and says, “I will stand at my watch and station myself on the ramparts; I will look to see what he will say to me, and what answer I am to give to this complaint.”

Ramparts were used as a watch tower, a place to see what enemy might be coming. Habakkuk declares he will wait for God’s second answer on the very place that would stop, or at least warn of, an invasion. Here the rampart may or may not be a construction, where Habakkuk intends to actually stand and wait. Whether there is a tangible rampart or not, there is definitely a figurative significance.

The rebel in me wonders if Habakkuk was getting all ‘whateverrrrr’ with God. Was he off to the ramparts to stand there all, “Eh like hello? look where I’m standing, a rampart! DUH!”  OK, so maybe the ‘whatever’ thing hadn’t arrived in Israel at that stage, but it’s clear that Habakkuk is not happy with God’s first answer and, with a bit of attitude, demands a second one.

The problems experienced by God’s people came from the fact that they constantly disobeyed God. In chapter 1 v 4, Habakkuk says ‘the law is paralyzed, and justice never prevails. The wicked hem in the righteous, so that justice is perverted.’

Despite Habakkuk’s complaining, the invasion did come; no rampart could stop God’s plan from coming to pass.

You want to stop the wrath of God from coming crashing down on your life – then stand on the Rampart, the Rock, that is Jesus Christ.

2 thoughts on “R is for Rampart”